The Wellsboro Women's Chorus is a group of women who share a love of singing.  We perform a diverse repertoire of music -  Broadway tunes, old standards, patriotic, contemporary & pop songs, religious hymns, and more.  We pride ourselves on our versatility and our lovely, blended sound! 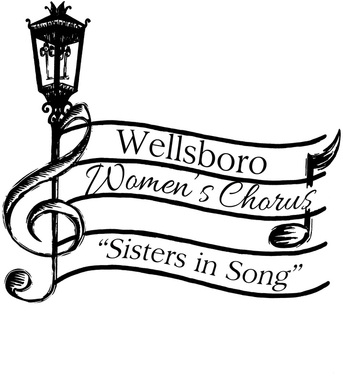 History of the Wellsboro Women’s Chorus

The idea of forming a woman’s chorus began with 5 women, several of
whose husbands were members of the Wellsboro Men’s Chorus. They talked
about it for several years, never dreaming they would actually perform in
public, just having fun practicing songs together.

Finally, in January, 1979, Zelda Antoine, Carol Clarke, Jackie Knaus, Ann Maracotta,
and Bev McKnight asked Pat Davis, “Ivory Lady” of the men’s chorus, to be their director and accompanist.  They met for rehearsals on Thursday nights in the room over Northwest Bank in Wellsboro.

At first they were few in number, but within several months, the word had spread
and they grew to 15 members.  Their first performance was at the Gmeiner Art &
Cultural Center and they sang “Second Hand Rose.”

Over the last 35 years, they have had many singing engagements at local churches,
nursing homes & senior housing, PA State Laurel Festivals, Dickens of a Christmas,
Corning's Sparkle celebrations,  in several cities in Canada, for the PA Republican
Women’s Convention in Harrisburg, at an exchange concert with choruses in Brantford,
Ontario,  and more.  The Chorus has performed many concerts on the Wellsboro High School
stage and elsewhere.  They often join forces to make lovely music with the Wellsboro Men's Chorus.

The Wellsboro Women's Chorus carries their love of music wherever they go, and consider
themselves “Sisters in Song!”